When the walls come tumbling down 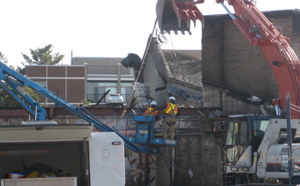 Two recent fires in Canada, one in Ontario and the other in Alberta, point to the
need for a more balanced approach to fire safety — one that combines the use of sprinklers with masonry firewalls.

On Thursday April 22, 2010, the owners of several longstanding businesses at a plaza in Waterloo, Ontario arrived at work that morning to discover their establishments in charred ruins. Numerous stores and restaurants, some of them in operation for decades, had been razed — with one exception: a restaurant that was left relatively intact due to a concrete block firewall separating it from the rest of the plaza. When the flames were extinguished and the smoke finally cleared, the block firewall remained standing while around it, I-beam and steel-stud-constructed framing had been burned through.

There are a number of factors that contribute to the spread and severity of a fire, from the building’s construction and contents to environmental factors such as wind and rain.

Similarly, there are several elements that contribute to effective fire safety. There is a tendency to look solely to sprinklers as a means of minimizing fire’s potential damage and loss of life. However, a more balanced design in construction takes into account the need for containment — keeping a fire in one store / apartment / condo / townhome separate from adjacent units. Experience such as that in Waterloo suggests that this kind of containment can only be achieved through the construction of concrete masonry firewalls.
“There’s no question that the masonry wall played a significant role in stopping the migration of the Campus Court fire” says Greg Olson, a Fire Investigator with the Office of the Ontario Fire Marshall and the lead on the Campus Court investigation in Waterloo. John Percy, Public Education Officer with Waterloo Fire Rescue, echoes the statement by saying simply: “The firewall did its job.”

Undoubtedly, had sprinklers been present, more of the plaza would have been saved — a fact that has prompted Waterloo Fire Rescue to launch an initiative promoting the importance of sprinklers to property developers. The Department would like to see sprinklers used in all new buildings — not only residential structures three storeys or higher (as is now the law in Ontario), or buildings used as seniors’ residences (as put forward by Ontario’s fire chiefs). In the words of Waterloo’s Acting Fire Chief Larry Brassard: “We will be working with other City staff to try and ensure that every new property developer gets the proper information in their hands well before shovels hit the ground so that they can make an informed decision about the installation of these devices.”

But consider the added protection sprinklers would offer in combination with masonry firewalls. For this reason, most structural engineers will agree that effective fire safety requires a balanced-design approach to building construction. ‘Balanced’ refers to the use of three key preventive components:

“Intuitively, it doesn’t make sense to rely only on one factor — sprinklers, for instance — to protect ourselves from fire,” says Gary Sturgeon, a building engineer who also consults on behalf of the Canadian Concrete Masonry Producers Association (CCMPA). Summing it up with a hockey analogy, he says, “You don’t rely on just your goalie — or just your forwards, or just your defence — to win the game. You need the whole team.”

Moreover, there is the consideration that in cases where sprinklers are affixed to wooden framing, when the framing collapses, often, so do the sprinklers — making it all the more important that they are accompanied by other safety systems such as firewalls. And while wood-frame and gypsum receive ‘firewall’ ratings in industry-standard testing, real-life experience shows time and again that the only wall that truly contains fire and doesn’t burn is one made of concrete masonry.

Clearly, the mandating of fire sprinklers in Ontario is a step in the right direction. However, combining them with masonry firewalls would take our safety a big step further.

About CCMPA
The Canadian Concrete Masonry Producers Association operates as Region 6 of the National Concrete Masonry Association and is the representative voice for the Canadian concrete block manufacturing industry. The Association supports concrete masonry producers and suppliers in a number of areas including standards, training, technological research, government relations, and marketing and communications. Through these areas, the Association works to ensure the highest standards of quality, and maintain the industry’s strong market presence.