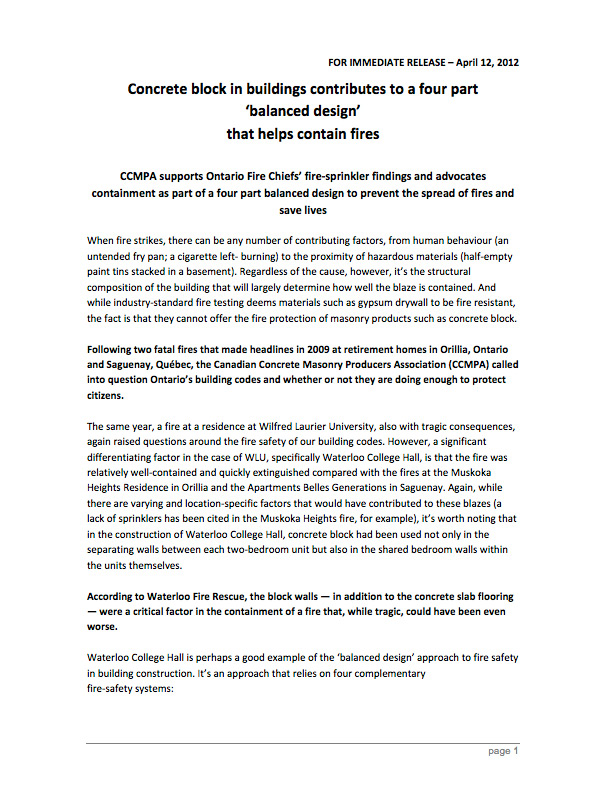 CCMPA supports Ontario Fire Chiefs’ fire-sprinkler findings and advocates containment as part of a four part balanced design to prevent the spread of fires and save lives.

When fire strikes, there can be any number of contributing factors, from human behaviour (an untended fry pan; a cigarette left- burning) to the proximity of hazardous materials (half-empty paint tins stacked in a basement). Regardless of the cause, however, it’s the structural composition of the building that will largely determine how well the blaze is contained. And while industry-standard fire testing deems materials such as gypsum drywall to be fire resistant, the fact is that they cannot offer the fire protection of masonry products such as concrete block.

Following two fatal fires that made headlines in 2009 at retirement homes in Orillia, Ontario and Saguenay, Québec, the Canadian Concrete Masonry Producers Association (CCMPA) called into question Ontario’s building codes and whether or not they are doing enough to protect citizens.

The same year, a fire at a residence at Wilfred Laurier University, also with tragic consequences, again raised questions around the fire safety of our building codes. However, a significant differentiating factor in the case of WLU, specifically Waterloo College Hall, is that the fire was relatively well-contained and quickly extinguished compared with the fires at the Muskoka Heights Residence in Orillia and the Apartments Belles Generations in Saguenay. Again, while there are varying and location-specific factors that would have contributed to these blazes (a lack of sprinklers has been cited in the Muskoka Heights fire, for example), it’s worth noting that in the construction of Waterloo College Hall, concrete block had been used not only in the separating walls between each two-bedroom unit but also in the shared bedroom walls within the units themselves.

According to Waterloo Fire Rescue, the block walls — in addition to the concrete slab flooring — were a critical factor in the containment of a fire that, while tragic, could have been even worse.

Waterloo College Hall is perhaps a good example of the ‘balanced design’ approach to fire safety in building construction. It’s an approach that relies on four complementary fire-safety systems:

Detection, most notably in the form of mandatory smoke alarms, has been the most well-publicized and arguably the most effective means of reducing injury and death due to fire. According to Canada Mortgage and Housing Corporation (CMHC), by 1999, the fire-death rate per 100,000 one- and two-family houses was 75 percent lower than it had been in 1980 — a drop attributed mainly to the legislated use of smoke alarms in new building construction.

Suppression is also being legislated in our building codes: in 2008, Ontario became the last jurisdiction in North America to mandate the use of sprinklers in high-rise apartments and condos (three storeys and higher). The recent study by the Ontario Association of Fire Chiefs underscores the need for sprinklers, especially in buildings housing elderly, frail and handicapped individuals.

Effective containment — or, as it’s referred to technically, compartmentalization — is a logical next logical step in the fire-safety equation. By containing a fire, you minimize its damage and essentially buy more time until it can be extinguished. Fire ratings obtained through lab testing offer an indication of that time. Using industry-standard two-hour tests involving exposure to 1800°C temperatures, a wall made of concrete block easily withstands the heat and the subsequent blast from a fire hose at 30 PSI (pounds of water per square inch). When the same testing is applied to fiber-reinforced gypsum panels, the hose penetrates the panels in about 10 seconds.

In a laboratory, we have the luxury of duplicating tests and debating the merits of one material over the other. Real life offers only one chance.

Concrete masonry can’t prevent fire, but it is the best way we have to contain and maintain its structural integrity, to help increase our chances of survival.