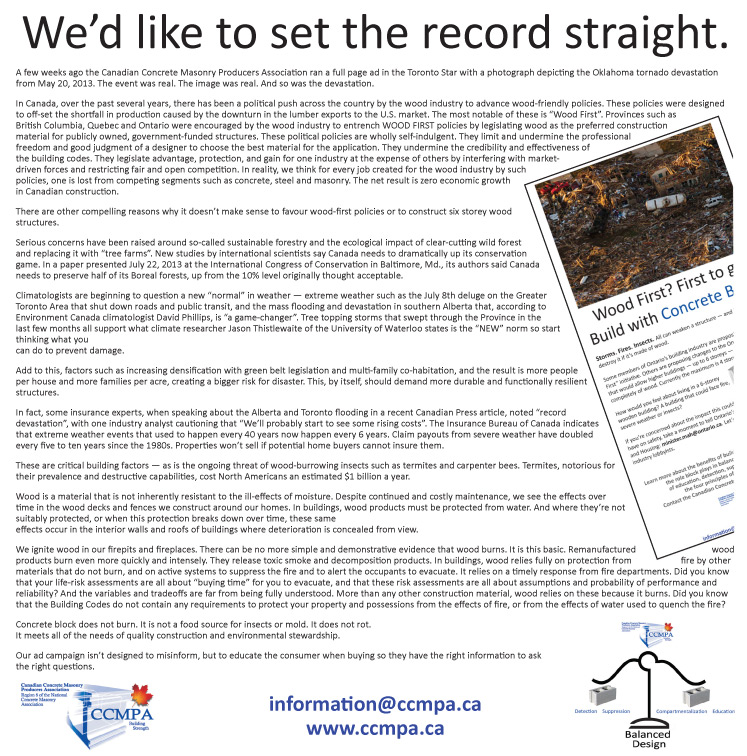 A few weeks ago the Canadian Concrete Masonry Producers Association ran a full page ad in the Toronto Star with a photograph depicting the Oklahoma tornado devastation from May 20, 2013. The event was real. The image was real. And so was the devastation.

In Canada, over the past several years, there has been a political push across the country by the wood industry to advance wood-friendly policies. These policies were designed to off-set the shortfall in production caused by the downturn in the lumber exports to the U.S. market. The most notable of these is “Wood First”. Provinces such as British Columbia, Quebec and Ontario were encouraged by the wood industry to entrench WOOD FIRST policies by legislating wood as the preferred construction material for publicly owned, government-funded structures. These political policies are wholly self-indulgent. They limit and undermine the professional freedom and good judgment of a designer to choose the best material for the application. They undermine the credibility and effectiveness of the building codes. They legislate advantage, protection, and gain for one industry at the expense of others by interfering with market- driven forces and restricting fair and open competition. In reality, we think for every job created for the wood industry by such policies, one is lost from competing segments such as concrete, steel and masonry. The net result is zero economic growth in Canadian construction.

There are other compelling reasons why it doesn’t make sense to favour wood-first policies or to construct six storey wood structures.

Serious concerns have been raised around so-called sustainable forestry and the ecological impact of clear-cutting wild forest and replacing it with “tree farms”. New studies by international scientists say Canada needs to dramatically up its conservation game. In a paper presented July 22, 2013 at the International Congress of Conservation in Baltimore, Md., its authors said Canada needs to preserve half of its Boreal forests, up from the 10% level originally thought acceptable.

Climatologists are beginning to question a new “normal” in weather — extreme weather such as the July 8th deluge on the Greater Toronto Area that shut down roads and public transit, and the mass flooding and devastation in southern Alberta that, according to Environment Canada climatologist David Phillips, is “a game-changer”. Tree topping storms that swept through the Province in the last few months all support what climate researcher Jason Thistlewaite of the University of Waterloo states is the “NEW” norm so start thinking what you can do to prevent damage.

Add to this, factors such as increasing densification with green belt legislation and multi-family co-habitation, and the result is more people per house and more families per acre, creating a bigger risk for disaster. This, by itself, should demand more durable and functionally resilient structures.

In fact, some insurance experts, when speaking about the Alberta and Toronto flooding in a recent Canadian Press article, noted “record devastation”, with one industry analyst cautioning that “We’ll probably start to see some rising costs”. The Insurance Bureau of Canada indicates that extreme weather events that used to happen every 40 years now happen every 6 years. Claim payouts from severe weather have doubled every five to ten years since the 1980s. Properties won’t sell if potential home buyers cannot insure them.

These are critical building factors — as is the ongoing threat of wood-burrowing insects such as termites and carpenter bees. Termites, notorious for their prevalence and destructive capabilities, cost North Americans an estimated $1 billion a year.

Wood is a material that is not inherently resistant to the ill-effects of moisture. Despite continued and costly maintenance, we see the effects over time in the wood decks and fences we construct around our homes. In buildings, wood products must be protected from water. And where they’re not suitably protected, or when this protection breaks down over time, these same effects occur in the interior walls and roofs of buildings where deterioration is concealed from view.

We ignite wood in our firepits and fireplaces. There can be no more simple and demonstrative evidence that wood burns. It is this basic. Remanufactured wood products burn even more quickly and intensely. They release toxic smoke and decomposition products. In buildings, wood relies fully on protection from fire by other materials that do not burn, and on active systems to suppress the fire and to alert the occupants to evacuate. It relies on a timely response from fire departments. Did you know that your life-risk assessments are all about “buying time” for you to evacuate, and that these risk assessments are all about assumptions and probability of performance and reliability? And the variables and tradeoffs are far from being fully understood. More than any other construction material, wood relies on these because it burns. Did you know that the Building Codes do not contain any requirements to protect your property and possessions from the effects of fire, or from the effects of water used to quench the fire?

Concrete block does not burn. It is not a food source for insects or mold. It does not rot. It meets all of the needs of quality construction and environmental stewardship.

Our ad campaign isn’t designed to misinform, but to educate the consumer when buying so they have the right information to ask the right questions.