Letter to MPPs about Height of Wood Frame Buildings Bill 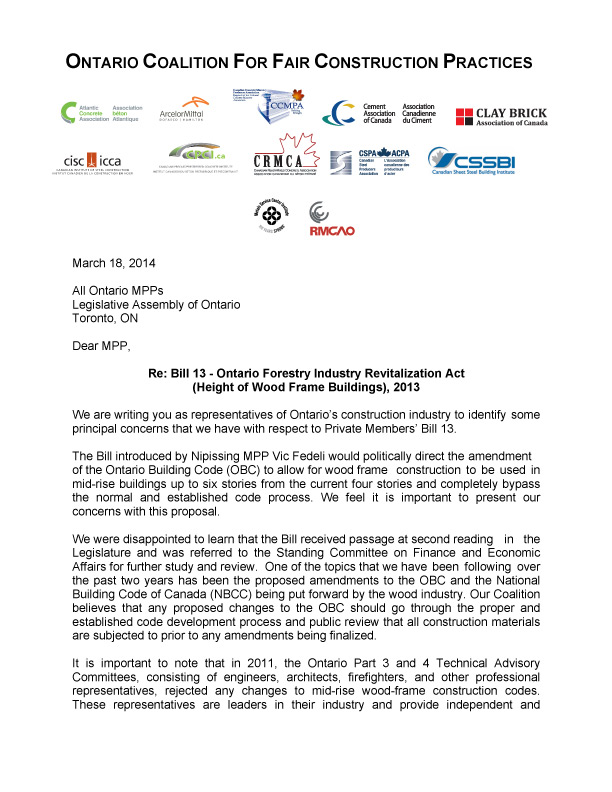 All Ontario MPPs Legislative Assembly of Ontario Toronto, ON

We are writing you as representatives of Ontario’s construction industry to identify some principal concerns that we have with respect to Private Members’ Bill 13.

The Bill introduced by Nipissing MPP Vic Fedeli would politically direct the amendment of the Ontario Building Code (OBC) to allow for wood frame construction to be used in mid-rise buildings up to six stories from the current four stories and completely bypass the normal and established code process. We feel it is important to present our concerns with this proposal.

We were disappointed to learn that the Bill received passage at second reading in the Legislature and was referred to the Standing Committee on Finance and Economic Affairs for further study and review. One of the topics that we have been following over the past two years has been the proposed amendments to the OBC and the National Building Code of Canada (NBCC) being put forward by the wood industry. Our Coalition believes that any proposed changes to the OBC should go through the proper and established code development process and public review that all construction materials are subjected to prior to any amendments being finalized.

It is important to note that in 2011, the Ontario Part 3 and 4 Technical Advisory Committees, consisting of engineers, architects, firefighters, and other professional representatives, rejected any changes to mid-rise wood-frame construction codes. These representatives are leaders in their industry and provide independent andbalanced advice based on their expertise and for the safety of Ontarians. The Ontario government ultimately listened to the Committees’ recommendations and no amendments were made with respect to the maximum height allowance of mid-rise wood frame construction when the revised Ontario Building Code was announced in November 2012.

The Ontario Coalition for Fair Construction Practices believes that any potential changes must address all safety and fire implications and do so through the normal code process. The massive fires that have recently destroyed several multi-storey wood buildings under construction in the last two years include Kingston, Ontario where the crane operator had to be heli-rescued; Richmond, British Columbia; and Edmonton and Calgary, Alberta demonstrate how dangerous and unsafe wood-frame buildings under construction are. The tragic loss of senior citizens in in January 2014 demonstrates how dangerous these buildings can be in operation and how many lives can be put at risk as a result. There are significant safety issues, public and private liability and other consequences, especially with moving too quickly on potential Code changes.

Another risk associated with this type of construction and often overlooked due to less immediate risk than fire is building envelope breaches. Building envelope breaches lead to issues of water ingress, mould and mildew which can pose long-term health concerns and respiratory issues. Our Coalition can provide numerous cases from the last 10 years of building envelope failures and fire events in four storey wood frame construction in provinces like Alberta that utilize this form of construction more frequently than Ontario. The Alberta government also rejected the request to bypass national and provincial building codes prior to adoption by the national building code of 6-storey wood frame construction.

Insurance issues must also be a consideration. In British Columbia, it is estimated that the wood frame course of construction insurance rates run significantly higher per month (depending on fire protection) in comparison to concrete construction rates. Even when completed with a fully functional sprinkler system, it is noted that the rates are still considerably higher for wood frame than for concrete. Further, as clean-up costs from water damage are higher, it has been estimated that wood frame condo and apartment building rates have more than doubled in the last five to ten years. As a result many insurers are reluctant to write new business.

We strongly believe that any consideration of changes to the OBC on midrise construction must be deferred until after the 2015 NBCC, allowing time for proper scientific assessment and coordination with the NBCC. Political interference in the established code development process is unwarranted, unnecessary and a potentially dangerous political route. The established code development process guarantees that any changes or alterations to the Code are made by those individuals with the proper qualifications and knowledge in order to accomplish one of the primary objectives of the code, “to limit the probability that, as a result of the design or construction of the building, a person in or adjacent to the building will be exposed to an unacceptable risk of injury due to fire, structural failure, or hazards during and after construction.”

Bill 13 represents a blatant aim to boost the wood industry at the expense of citizens’ safety and if it is brought forward for a final vote, we recommend that you vote against it. The Ontario Coalition for Fair Construction Practices feels that a full public policy debate is required to adequately address the concerns with 6 storey wood frame construction in the event that the Ontario government wishes to bypass the National Building Code of Canada using provincial legislation. There needs to be discussion about what risks Ontarians are willing to be exposed to when it comes to the construction standards set for the buildings that we live and work in.

We welcome an opportunity to meet or discuss further with you any additional information you might require.