THINGS MUST CHANGE! – A letter from Marco Tommassel 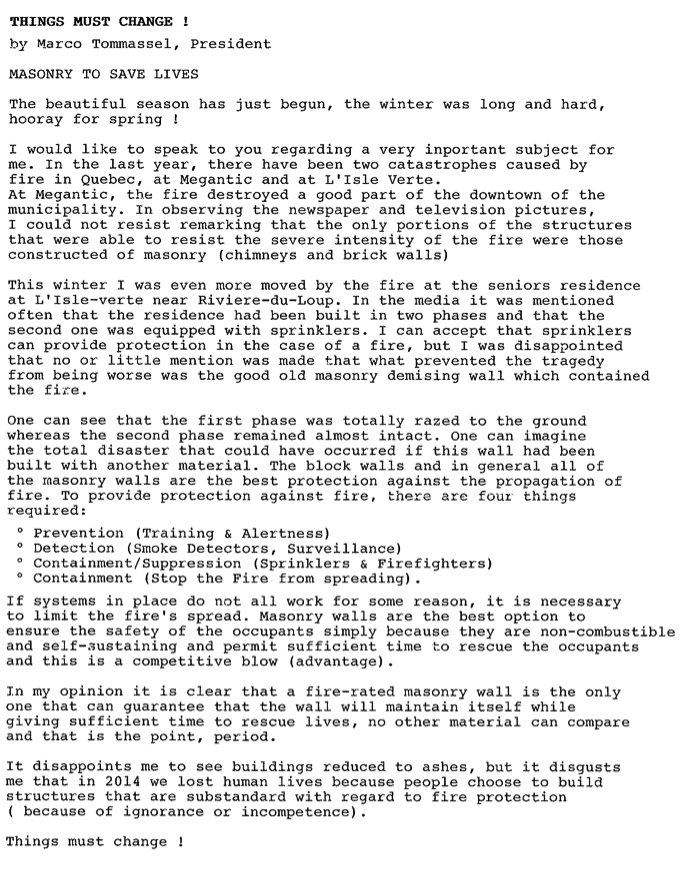 MASONRY TO SAVE LIVES

The beautiful season has just begun, the winter was long and hard, hooray for spring!

I would like to speak to you regarding a very important subject for me. In the last year, there have been two catastrophes caused by fire in Quebec, at Megantic and at L-Isle Verte.

At Megantic, the fire destroyed a good part of the downtown of the municipality. In observing the newspaper and television pictures, I could not resist remarking that the only portions of the structures that were able to resist the severe intensity of the fire were those constructed of masonry (chimneys and brick walls).

This winter, I was even more moved by the fire at the seniors residence at L’Isle-verte near Riviere-du-Loup. In the media, it was mentioned often that the residence had been built in two phases and that the second one was equipped with sprinklers. I can accept that sprinklers can provide protection in the case of a fire, but I was disappointed that no or little mention was made that what prevented the tragedy from being worse was the good old masonry demising wall which contained the fire.

One can see that the first phase was totally razed to the ground whereas the second phase remained almost intact. One can imagine the total disaster that could have occurred if this wall had been built with another material. The block walls and, in general, all of the masonry walls are the best protection against the propagation of fire. To provide protection against fire, there are four things required:

If systems in place do not all work for some reason, it is necessary to limit the fire’s spread. Masonry walls are the best option to ensure the safety of the occupants simply because they are non-combustible and self-sustaining and permit sufficient time to rescue the occupants and this is a competitive blow (advantage).

In my opinion, it is clear that a fire-rated masonry wall is the only one that can guarantee that the wall will maintain itself while giving sufficient time to rescue lives, no other material can compare and that is the point, period.

It disappoints me to see buildings reduced to ashes, but it disgusts me that in 2014, we lost human lives because people choose to build structures that are substandard with regard to fire protection (because of ignorance or incompetence).