What’s Separating You From Your Neighbour? 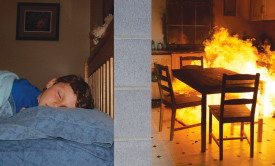 CCMPA’s national media campaign prompts consumers to think about the fire safety of today’s home-building materials — and the advantages of building with concrete block.

Many Toronto-area residents will recall the city’s top news story on Wednesday, February 20, 2008: A six-alarm fire — one of the worst in Toronto history — that hollowed out
several adjoining businesses in one of the city’s heritage districts. At its height, the blaze had 150 firefighters and 56 fire trucks battling flames that threatened to burn out of
control and, when finally extinguished, had razed part of a city block. Remarkably, no one was killed, though the damage was estimated at more than $10 million.

It was a grim reminder of the brute force of fire — how quickly it can spread and the destruction it can cause, particularly in adjoining buildings.

Despite headline-making disasters such as this one, however, 2006 stats from the Ontario Fire Marshal indicate that, overall, the losses caused by residential fires (43 percent)
by far surpass the losses resulting from fires in business or commercial properties (about 8 percent). Hence the question posed above: What’s separating you from your neighbour?
If you live in a townhome or semi-detached home, are your adjoining walls built with wood frame and drywall — or are they built using concrete block?

These are the kinds of questions the Canadian Concrete Masonry Producers Association (CCMPA) hopes consumers will ask themselves when they see the billboards developed
as part of CCMPA’s national campaign to raise awareness of the fire retardancy of concrete block.

“Consumers are selective when it comes to the cosmetics of a home — the hardwood, the ceramics, the fixtures and appliances,” says Paul Hargest, President of CCMPA. “They
need to be equally selective about the structure of the home — the quality and durability of the materials used to build it.

This is all the more important given the increasing density in urban areas and the fact that so many of us live in dwellings that are attached.”

Hargest adds that while adjoining walls made of wood frame and drywall will meet Ontario Building Code requirements, in a fire, the walls will burn.

Concrete block, on the other hand, is non-combustible: It doesn’t burn, and it reduces the risk of structural collapse. It also doesn’t produce toxic gases or smoke, which themselves
are the cause of death in many residential fires. In industry standard fire testing (prescribed by the American Society for Testing and Materials — ASTM), there is no contest: Measured in terms of durability and heat transfer, concrete block beats wood and drywall hands down. 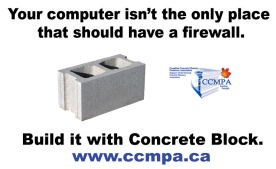 In explaining the billboard design for CCMPA’s campaign, Hargest points to figures from the Council of Canadian Fire Marshals and Fire Commissioners that indicate the three
most common causes of residential fires: smokers’ material and open flame, heating equipment and — the worst offender — cooking equipment. Research from the Ontario Fire Marshal shows cooking to be ‘the number-one ignition source in preventable residential fires’. Sixty-nine percent of these fires start because the cooking was left unattended.

The billboard images specifically target these risks, while the ‘firewall’ headline is not only a play on words but also a reminder that we owe it to ourselves to protect our homes at
least as much as we do our computers.

A visit to the CCMPA website (ccmpa.ca) reveals some of the other reasons to build with concrete block — the fact that it’s a more effective sound barrier; that it prevents heat loss (it’s about twice as energy-efficient as poured concrete); it better withstands moisture and inhibits mould growth; and it contains a high degree of recycled material. It’s also competitively priced: Compared with wood frame, light-gauge steel frame and drywall, block is either the same price or slightly cheaper.

“There’s no doubt that a working smoke detector and a good escape plan are vital to protecting yourself from fire,” says Paul Hargest. “But so is having a solidly built home
constructed with fire-retardant materials.” He adds, “You can’t control the forgetfulness of a neighbour, but you can ensure that the wall separating the two of you is as fire-safe as it can possibly be.”