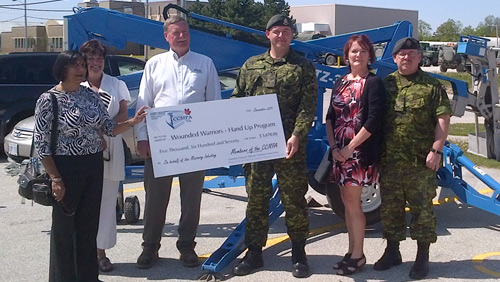 In 2011, CCMPA wanted to support a charity that was helping returning soldiers reacclimatize to living in Canada. It was decided that we would to assist an injured person and if we could help with a “Hands Up” project, all the better.

“The fund was started because we noticed that the troops in Germany had very little in the way of their personal items. They have very little in the way of electronics and entertainment to pass the time,” says Captain Johnston. They also noticed that medical and support staff were digging into their own pockets to get the little things to ease the burden. From this the fund was born.

Wounded?Warriors.ca (The Sapper Mike McTeague Wounded Warrior Fund) supports all Canadian Forces members wounded on operations, at the outset of their healing process. The fund aims to improve the general morale and welfare of the soldiers and their families by working through first?line caregivers, medical staff, chaplains and assisting officers.

Captain Wayne Johnson, the founding member of the organization, made every effort to assist us in finding Cpl Paul McLean. CCMPA had specified that it was interested in contributing funds in the form of tools or other masonry related equipment required for a soldier’s livelihood.

Cpl McLean is a reserve soldier with the Grey and Simcoe forester in Owen Sound. He is a licensed stone mason who owns his own business. On July 29th, 2010, he was injured while on duty in Afghanistan. Upon returning to Canada, he was unable to continue as a mason thereby curtailing his ability to support his family. The contribution made by CCMPA was used to purchase a Genie 34/20 Articulating Lift which allows him to continue earning his living in the masonry industry. For this Cpl. McLean is very grateful.