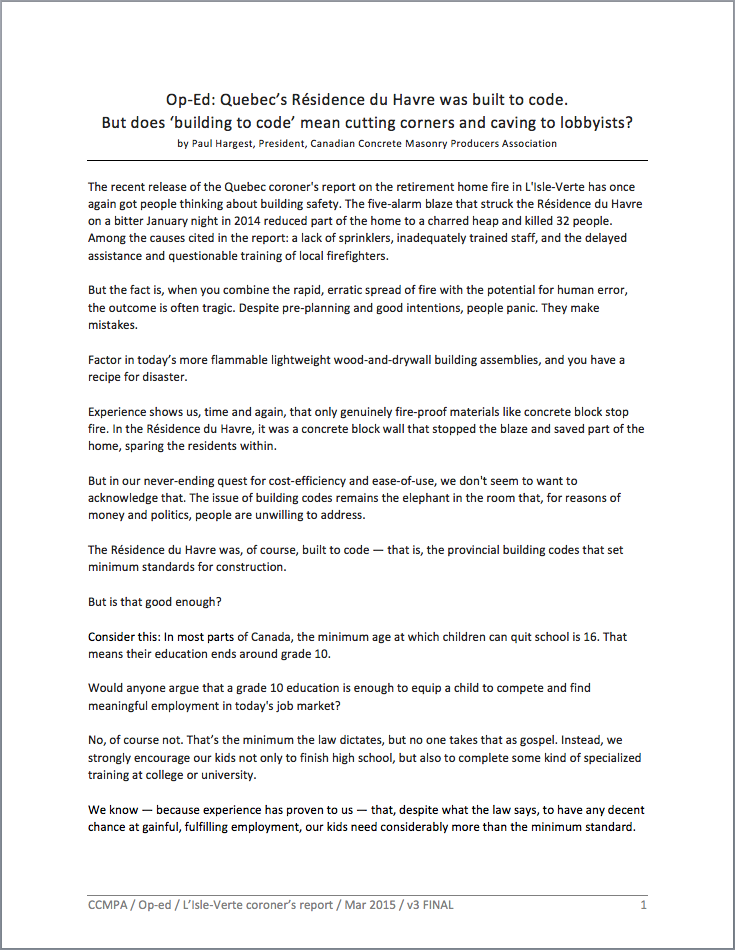 But does ‘building to code’ mean cutting corners and caving to lobbyists?

The recent release of the Quebec coroner’s report on the retirement home fire in L’Isle-Verte has once again got people thinking about building safety. The five-alarm blaze that struck the Résidence du Havre on a bitter January night in 2014 reduced part of the home to a charred heap and killed 32 people. Among the causes cited in the report: a lack of sprinklers, inadequately trained staff, and the delayed assistance and questionable training of local firefighters.

But the fact is, when you combine the rapid, erratic spread of fire with the potential for human error, the outcome is often tragic. Despite pre-planning and good intentions, people panic. They make mistakes.

Factor in today’s more flammable lightweight wood-and-drywall building assemblies, and you have a recipe for disaster.

Experience shows us, time and again, that only genuinely fire-proof materials like concrete block stop fire. In the Résidence du Havre, it was a concrete block wall that stopped the blaze and saved part of the home, sparing the residents within.

But in our never-ending quest for cost-efficiency and ease-of-use, we don’t seem to want to acknowledge that. The issue of building codes remains the elephant in the room that, for reasons of money and politics, people are unwilling to address.

The Résidence du Havre was, of course, built to code — that is, the provincial building codes that set minimum standards for construction.

But is that good enough?

Consider this: In most parts of Canada, the minimum age at which children can quit school is 16. That means their education ends around grade 10.

Would anyone argue that a grade 10 education is enough to equip a child to compete and find meaningful employment in today’s job market?

No, of course not. That’s the minimum the law dictates, but no one takes that as gospel. Instead, we strongly encourage our kids not only to finish high school, but also to complete some kind of specialized training at college or university.

We know — because experience has proven to us — that, despite what the law says, to have any decent chance at gainful, fulfilling employment, our kids need considerably more than the minimum standard.

So, to complete the equation here, why would anybody consider moving their loved ones into a home built to minimum standards? A home designed not to withstand fire — but designed for an exit strategy? You may or may not know that when building materials are deemed “to code”, it generally means they are intended not to prevent or stop fire, but to allow people time to get out.

If those people are elderly and have mobility issues — in a home with minimal staff to assist — consider how long it might take to evacuate the building.

Too long — as the residents of L’Isle-Verte know all too well.

Wood and drywall simply can’t hold back a blaze of that magnitude. Concrete block can.

There was a time when Canada’s National Building Code required firewalls to be built from concrete or masonry materials such as block.

Then the Gypsum Manufacturers of Canada recommended that the code essentially be loosened to allow firewalls to be built from materials other than masonry. Gypsum firewall construction requires less time and skill than building with concrete block.

Initially the recommendation was intended to apply only to townhouses. However, when implemented in 2005 — despite concerns at the time — the code was amended in a way that allowed the change to apply to all buildings.

Similar lobbying efforts are now underway by the lumber industry to mandate wood as a building material of choice. In British Columbia, for example, the Wood First Act, passed in 2009, requires that wood be considered the primary material in all new, publicly-funded buildings.

As a result, B.C. is home to initiatives such as the 18-storey wooden residence now being built by the University of British Columbia. There also have been plans put forward by a Vancouver architect for a yet-to-be-built 30-storey wooden skyscraper.

Aside from the fact that these buildings could be fire hazards, there are also concerns related to water damage, insects, and penetrating objects, to name a few.

All of which is not to say that building codes should quash innovation. Indeed, many code changes are positive, and encourage forward-thinking construction.

But first and foremost, we must build with people in mind. And that means not cutting corners with today’s minimum code standards, but building practically and safely for the real world.